This show…there is so much to say about this show.

Game of Tiaras was the wildest of times, and my most favorite show with this department that I’ve ever been on stage in.

To give you a bit of context, I played the Snow Queen(Ellie) in the play Game Of Tiaras, written by Don Zolidis. If you would like, you can read the complete script for free here, but I’ll give you a quick summary of the play pulled straight from its’ supporting website.

“When the aging king of a Magical Kingdom (England) decides to split his empire between his three daughters, Cinderella, Belle, and the Snow Queen (who in no way resembles a copyrighted character), terrible tragedy ensues. Terrible, hilarious tragedy. Combining the gut-wrenching plot twists of Game of Thrones and the soul-numbing despair of Shakespearean tragedy, this adaptation of King Lear will leave you dying with laughter as the body count mounts. When you play the Game of Tiaras, you win or you die.”

Game Of Tiaras was the most fun I’ve had in a show and was the best way to form inside jokes and stronger bonds with both old and new members of the department.

This show was also the first time I had ever had a principal role in a play and the first show post-NSLC and New York. In addition to those onstage opportunities, I got some more insight into the directing and casting aspects of theatre because of the fire NSLC had sparked in me to explore all territory of the theatre realm(and at the allowance of my director). It felt like the time to prove the talent and work ethic I had proudly spoken of upon arriving back to California.

It felt like one of my best shows yet. On stage, getting laughs and entertaining even the tiniest of audiences felt like the biggest achievement of a lifetime. Every time the audience gave me something to go off of, whether it was big laughs after my “kingdom of ice and snow” monologue or the success of my cue cards, I felt like a truly talented actress for the first time in a long time.

Because of this, I wore one of my favorite and professional outfits from when we went to see To Kill A Mockingbird on Broadway, in attempts to comfort and calm me down. I got a few positive comments from friends and some eye roles from some who jotted me down as overdramatic, but it worked.

Obviously, I got the part! For the very first time, I auditioned for a role I knew I was right for and got it. It was pure bliss. 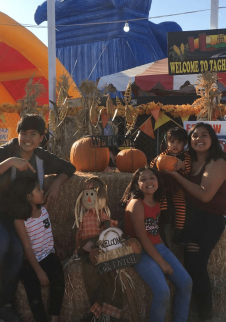 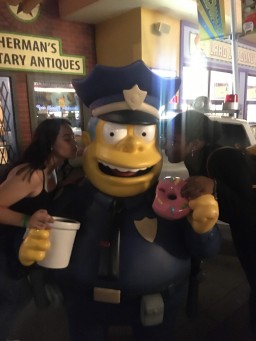 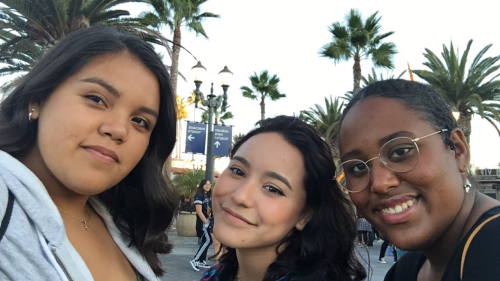 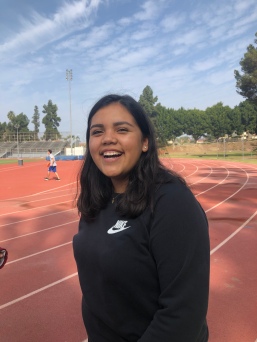 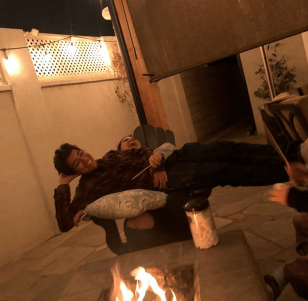 Me and Raymond, Halloween 2019 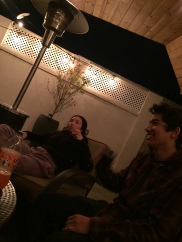 The next two months of rehearsal and process went by in a flash. Some moments were excruciatingly long, but I enjoyed every single second of it. Faster than we had all thought it would, and after some really long run-throughs and tech days, opening day was here.

On the day of the opening, I was a complete bundle of nerves. I had spent the entire day freaking out, while all of my friends were trying to calm me down and my castmates were beside me, also about to piss their pants or cry at the drop of a hat.

After school, I went to the center with Em, Alex, and Izzy until about 4pm. Then, my mom picked my brother and me up to get some last-minute costume necessities and some things for dinner.

We rushed back home and got there by 5pm when I immediately hopped into the show and then began to get ready for the show. Call time was 7pm but I take forever to get ready for anything, especially shows. I was singing because I was nervous and laughing for the same reason. I couldn’t eat because my stomach was already upset from nerves and by the time we had actually headed out the door on our way back to school for call time, I had to make three trips back inside because I was so panicked and scrambled that I kept forgetting things.

As soon as I got there, I found a green room completely overtaken by castmembers and their individual collections of props, costumes, and makeup bags. I was consumed by the frantic panic across the dressing rooms, green room, stage, and house while Jules and Loreal did my hair and makeup (because I am completely useless in those departments).

I was running around everywhere singing the same three lines of Defying Gravity from Wicked (a small bit I had in the show) and rearranging my props and such as the cue song taunted us all.

The song ended, the lights dimmed, and the curtains opened. The show had begun. 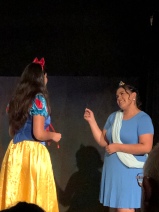 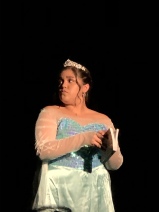 As soon as it had started, it was over. Opening night was a daze and the audience was great. We were getting off on the right foot.

The second show was not quite as dazzling. The audience was small and the first act didn’t go so well. But, the second act was much better and went pretty well.

Friday night of this week went okay too, and lots of my friends and family were in the audience. Most of which, I got lots of pictures with. 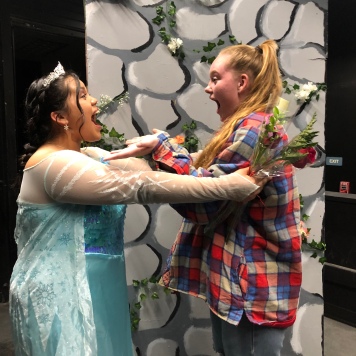 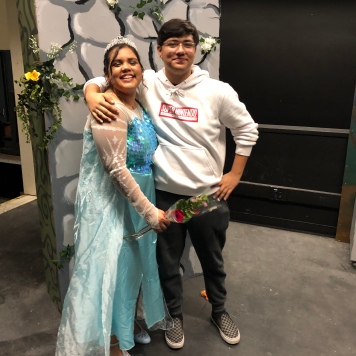 And closing. Oh, what can I say about closing night?

It was by far our best show of the run. It was also the best audience we had. Up until last night, I hadn’t broken character, not even once. But one adorable little kid, who I soon found out was one of my castmates’ little brothers, was reading my title cards and made me laugh in the midst of my “icy snow b**ch” stare.

Those three lines of Defying Gravity that I had to sing went as great as the first night and I got a bunch of laughs in the usual and new places. Overall, it was the show we had the most fun with because there was no pressure. Despite there being 80 people in our 60 seat theater, we were the most calmed and energetic for closing, the best closing present we could give ourselves.

And now, an open love letter to Ellie.

You gave me the opportunity to become a leader and own my choices, good and bad. You helped me embrace happy accidents and awful disasters. You gave me my first experience with sword fighting on stage and let me belt some lines of Defying Gravity on stage, no matter how short the time.

But most importantly, you taught me to let it go.

Thank you so so much. You’re someone I will never allow myself to forget, and someone I’ll never want to forget.

Hi guys! Thanks so much for reading my blog post!

I am so so sorry for not posting on Tuesday, but life got in the way! This show was the biggest gift I’ve received as a performer and is probably the cause for much of my improvement as an actress. I will never stop being grateful for this opportunity.

As usual, like and comment if you please, I’d love to learn about you and your thoughts on my writing or my blog so far! If you have any thoughts on this post or have any suggestions for what you’d like to see from me in the future, please let me know! I’d love to hear from you all!

I’ll see you all on Sunday with another post and I honestly can’t wait to share something new with y’all. I have no idea what it is yet, but I’m sure I’ll figure it out!

Want more updates on the blog of info about me? Follow my social media below!

An eighteen year old girl, exploring the world and writing about it too. Sometimes, venturing into the ones that thrive in my head and sharing it with all of you. View all posts by Kate Santos

Quote of the Week

We are all mortal until the first kiss and the second glass of wine.

Jessica Pardoe is a PR & Lifestyle blogger, writing about public relations and industry knowledge. Here you can find all posts by Jessica, articles are updated regularly and always written with passion.

A place for creatives.

Whispers of a yellow butterfly

“Fill your paper with the breathings of your heart” - William Wordsworth

My life as a black, disabled teenager

Living Outside the Lines